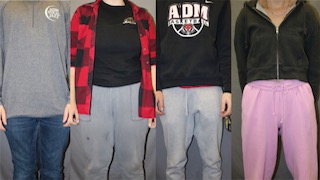 Is the Dress Code Sexist?

The dress code at ADM was previously reevaluated and changed as of 2018. Prior to this, students were not allowed to wear leggings, which have a clear target demographic of women. Because of the change in this rule, girls are now free to wear leggings to school as much as they would like, showing growth within the public school system. This leads me to believe that there is plenty of untouched potential for the fight against the dress code.

This may seem insignificant or even trivial to some, but I look at this as a form of sexism towards women. In terms of disparity within punishments of students of different genders for breaking dress code, there is none, but I do believe that the rules outlined within the text favor boys over girls.

After a review of all clothing standards for school, the only, somewhat specific thing aimed at boys is, “The cut of sleeveless garments must not expose undergarments or be otherwise immodest.” To the students, this reads that bras cannot show in a cut-off shirt. Boys are free to wear cut-off shirts if the straps are more than two finger’s width. The only argument to be suggested here is, what part of the man’s body is deemed immodest, therefore unfit for school? When the nipple is shown through the sleeve cut out? Even so, this is the only gender-directed rule for boys within the handbook, whereas females have several called-out sections.

According to Principal Griebel, the school does not track the number of students who get dress-coded and he does not require the staff to notify him or the administration when they dress-code students.

Straight from the student handbook it says, “Bare midriffs, immodestly low cut necklines, off the shoulder, or bare backs are prohibited.” The school board explains their reasoning behind these rules is to provide a safe and secure learning environment. To this I must ask, when did my belly button pose a threat? If the dress code is broken, students must face consequences. According to the guidelines, students are sent home to change, receive an unexcused absence, with a potential detention sentence. Why does the way I am dressed affect mine, or any other student’s learning opportunity?

Instead of instilling in young women that the way you dress permits unfair treatment, let’s encourage them to express themselves and remain comfortable in their bodies. Let’s teach young boys and teachers that the shirt on another student’s body shouldn’t allow the person to be sexualized in a learning environment. That’s what the school board is saying, is it not? “Immodestly low cut necklines.” For another human to exist with breasts is now punishable. This poses the inquisition of women with different body types not having the same rules apply. A female with a smaller cup size can get away with wearing the exact same shirt that wouldn’t be allowed on someone more developed. Because there is “less” to show off, it makes it okay? The outfit is perceived as racier on one student than another due to their body types, which exemplifies the sexualizing of children’s bodies. This treatment is not only unjust, but is senseless.

Zoe Marckmann, an ADM senior who have never been dress coded, says, “The dress code is very annoying because girls are mostly dress coded for some clothes that aren’t even bad.”

Taking a look back to the rule change where leggings are now permitted at school, nothing in the learning environment has changed. If students are still being educated and maintaining safe places to be taught, there is no reason why this same theory shouldn’t apply now.

“The school board listens to our recommendations regarding dress code.  They will discuss or ask questions when these are presented if they feel the need to do so.  I recommended we allow leggings because we as a building leadership team felt it was appropriate to allow this style of pants to be worn.  Nothing has changed in the learning environment since this has changed other than more leggings being worn,” says Principal Griebel.

I do not believe that changing the dress-code to be more inclusive of both genders, and all bodies, would negatively affect the school in any way.