Why News Journalism has turned into my family at school. 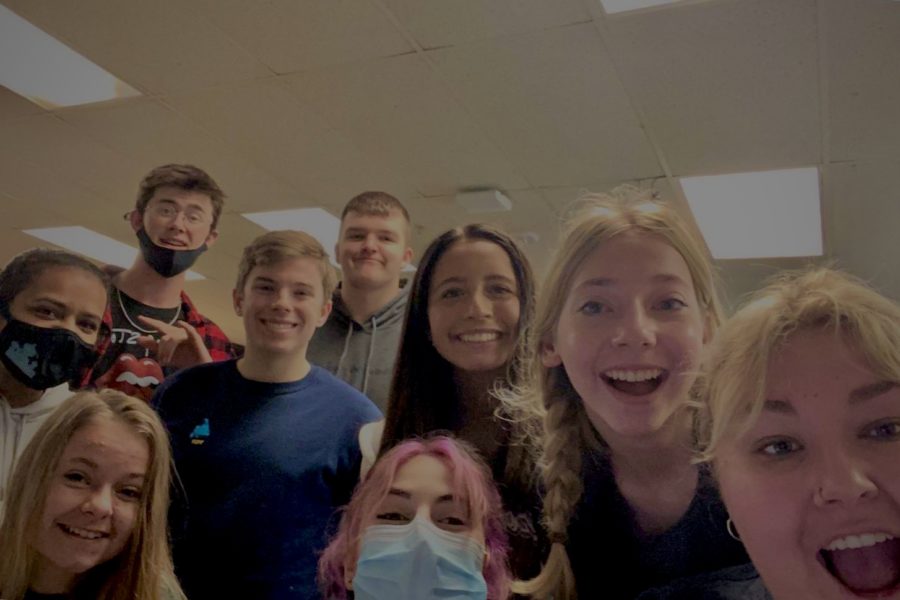 What I learned from taking ADM News Journalism this school year.

I still remember my first day of News. I sat at the desk that was the farthest away from the rest of the people in the class, and I stressed out. A lot. I only knew one person in the class, and she and I weren’t super close friends. How was I supposed to film funny videos and write stories with these people?
I had no idea what I had just gotten myself into. See, when I signed myself up for this amazing year of News Journalism, I had no idea that Lauren would become such a bright and happy person. I had no idea I would look forward to every class just to hear her “good news” of the day. And I had no idea that Sean and Doc and Aaron would create amazing memes that would leave the class laughing for days. I had no clue that I would learn how to buy retail or how to make iced coffee from Brookelyn, or share a laugh with Callie about hiding under a desk. I had no clue I would get to know how kind and gentle Kashish was. I had no idea I would become so close with Paige, and share so many funny moments with her. And of course, I didn’t know I would be making TikToks with Haley while the class wrote stories.
See, this class gave me a family that I never expected to have this year. And Mrs. B of course, was our honorary mother. She put up with us more than I expected her to. At times, I half expected her to walk out of the room because Aaron said something stupid, or Lauren spent 15 painful minutes on “good news” again. But yet, she never left us. Partly because she was required to stay by the state, but also because she loved us. She taught us the importance of family. She taught the class that no matter what, it’s important to stick together, and laugh it out.
Also during my wonder time on the News Staff, I learned how to come out of my shell. I remember being so scared to apply for the role of Editor-In-Chief. When it was announced that I got the position, all I did was smile a little bit and wave. But as the year went on, I started to grow into the role more. I was more confident in the classroom, and I was happy to share my voice with others. This class encouraged my creative spirit, and gave me a voice unlike any other class before it.
News also taught me the importance of the deadline. When I was first starting out, I met deadlines with ease. But by the time February rolled around, my motivation to write stories was gone. I thought it would be best to push all of my stories until the very end of the month to catch up. I did this every month after that. Even this one. I’ve now mastered the art of the 15 minute news story, and I think I could probably write an essay in 30. And I don’t think I ever missed a deadline. Well, not for stories at least.
The beloved Friday Flash had its ups and downs this year. We only managed to post two Friday Flash videos on time. Partially due to the amazing abilities of the staff to meet deadlines, and partially because editing takes forever and a half. In the end, we managed to get them all posted (yes, please go watch them) through teamwork, and a lot of refilming.
Finally, the last thing that I learned on ADM High School’s Journalism Staff was how to have fun. We start the class every morning with “good news.” As I mentioned before, we timed Lauren because she had a tendency to go a little long. I think her longest “good news” was 15 minutes, and it was filled with group laughter, “that’s a story idea” being yelled at least once, and Sean covering his face out of shame because Lauren said “baddie queen” too many times. After “good news,” we would take to our production time, or our project of the day. Sometimes it would be a lesson, where Teck would interject with jokes that would stop the lesson for a little longer than it should’ve been stopped, or Cars (the movie) jokes from everyone during production time.
Now, this article makes it sound like we don’t get any work done. But if you’ll notice, we have three new podcasts, plenty of new stories, and we completely re-styled the website. All it took was some hard work, and a little laughter.
And in all those moments I mentioned earlier, where everyone was laughing at weird jokes that no one understands, absolutely everyone was laughing, and everyone was included. This staff took people from all different backgrounds, and social groups, and combined them to be one big family. Now, we have a connection that I don’t think any class can achieve, and we cherish each other like family.
If you’re looking for a reason to take News, just take this: you’ll come into the class scared, and worried about the rest of the year. And when you leave, you will definitely be a changed, and happier person because of it.