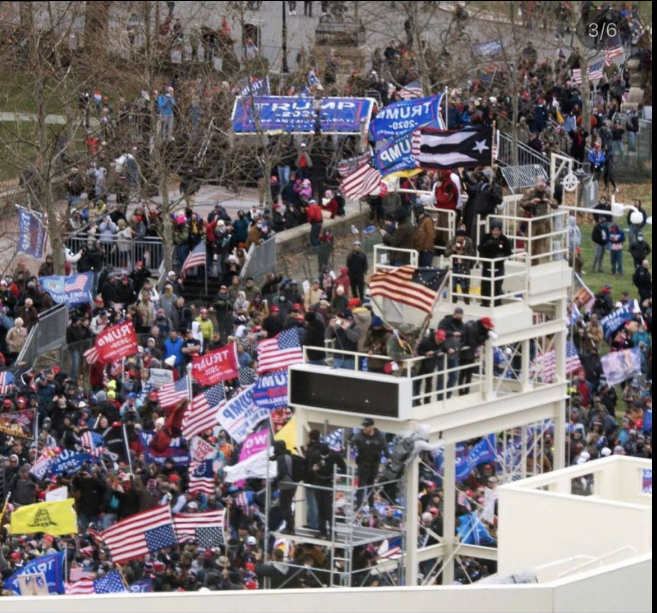 Trump supporters gather in front of the US capitol building.

What once was a symbol of American freedom and democracy was subject to a violent protest on Wednesday, January 6. The capitol building, where both the Senate and the House of Representatives meet, was breached by Trump supporters that contested the election results. This was incited after the “Save America Rally,” where thousands of supporters all witnessed the current president lament about the results of the election.

At the end of the speech, as Congress was counting the electoral votes to secure a Biden victory, Trump urged the protestors to march on Pennsylvania Avenue.

Inside of the capitol, videos and photos can be seen of protestors waving Trump flags, sitting in the Speaker of the House’s seat, breaking into private offices, and even looting. Other pictures can be seen of senators hiding, protestors scaling the outer wall, a person waving a Confederate flag, and protestors fighting with police.

As well the capitol building breach, there are reports of pipe bombs that were found outside the Republican National Committee (RNC) and in front of the Democrat National Committee (DNC). The FBI is currently looking for any information regarding those bombs.

A series of arrests have been made, as the rioters that breached the capital are being apprehended from all around the nation. Richard Barnett, the man that was seen breaking into House Speaker Pelosi’s office, has been arrested, as has the man seen carrying zip ties (to “handcuff” senators, no doubt). As well as that, Adam Christian Johnson, the man carrying Pelosi’s lectern in the viral photo is being held in a prison on a federal warrant. A 70-year old man from Alabama was apprehended for possessing a firearm and 11 Molotov cocktails on the scene as well. Many of the people that have breached the capital have been added to the FBI’s Most Wanted list, under the new category “Capital Violence”.

Criticism from the American public toward the protestors, security, and Trump has been deafening. The protestors have been labeled as domestic terrorists, radicals, and more.  However, the harshest criticism is in response to Trump’s reaction to the riots.

“We have to have peace. So go home. We love you. You’re very special,” President Trump said in a video posted on Twitter. “I know how you feel, but go home, and go home in peace.”

While the video possibly had good intentions, it was

not received well by the public. He was heavily criticized for the way he handled the Capital riot versus the BLM protests over the summer, where he said, “When the looting starts, the shooting starts” in a tweet. The inconsistency between the way the two riots were handled furthered the rage and shame of Americans.

“Each day that passes, I am more and more embarrassed to be American,” Youtuber Cory Kenshin tweeted. “Today’s events at the capitol say to me if I were born white I could get away with LITERALLY invading the capitol, but since I’m black, a traffic stop could end with me [getting] shot.”

Trump’s Twitter account was permanently banned for breaching Twitter’s guidelines. After the events of the riot, President Trump promised an “orderly” transition. However, Democrats are pushing for impeachment or looking to Vice President Pence to invoke the 25th amendment.

ead of security at the capitol.

Even though the event occurred in Washington D.C., the effects can be seen in Adel, Iowa. Many people in the student body have strong opinions regarding the riots, regardless of political opinions and worldviews.

“It definitely shouldn’t have happened,” senior Josh Norris said. “People are just really pissed off. But if we put ourselves into their shoes, we can maybe understand why they are doing that.”

There is no doubt that the riot was caused by a feeling of distrust in the American democratic system. To place ourselves in their shoes does not mean to sympathize with the protestors, but rather try to understand the reasoning behind the riots, whether they were justified or not.

“The fact that America is currently going through all this turmoil surrounding the election shows a severe amount of distrust within the way that we elect our presidents, our senators, and our representatives,” said senior Brennan McGee. “You can’t run a country successfully upon that [distrust]. In order to get back to a,

sort of, sense of peace, you should find ways to regain that trust within the system. Or else, we are in severe threat of a broken union.”

The distrust regarding the election process likely comes from the current President’s cries of election fraud. When doubt and paranoia come into play, violence can occur as well.

“If any other cause had tried to [storm into the capitol], they would have been murdered on sight,” said senior Kenna Wheeler. “I think that it was an attempt at a coup, and it was a really bad attempt at it. I think it was stupid, dangerous, and disrespectful.”

Hopefully, the story is finished. However, on Monday, January 11th, the FBI released a statement saying that there are plans of armed protests in all 50 states if Trump is removed from office, whether it is through impeachment or on January 20th. Security has been increased for the inauguration, and President-elect Joe Biden said that he was not afraid to speak in front of the capitol.