Who is the GOAT, Lebron or MJ? 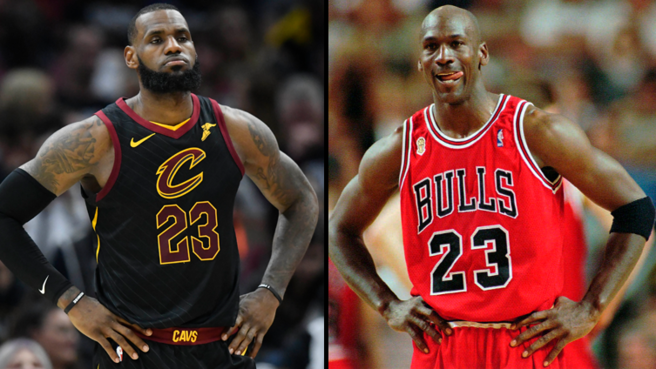 The world of sports have come to a stop during this pandemic, it is only right to discuss who really is the greatest basketball player of all time. The first two people that will come to peoples minds are Micheal Jordan and Lebron James, I am here to give my opinion with facts and research of who I think is the greatest of all time.

First I will talk about Micheal, he was drafted by the Bulls in 1984 with the 3rd pick. Micheal in his time with the Bulls won 6 championships and never lost a finals series in his career. MJ was mostly known for his scoring with will, his defense and of course his iconic dunks. MJ ended his career with the Wizards but when he retired he finished with 5 MVP awards, rookie of the year and even a defensive player of the year in 1988. Micheal’s career averages were 30 points 6 rebounds 5 assists with also 2 steals per game.

Now I will talk about Lebron James. Lebron never went to college he went straight to the pros out of high school. He was drafted by the Cleveland Cavaliers in 2003 with the first pick. After many play off failures he left Cleveland to go to the Miami Heat to team up with Dwayne Wade and Chris Bosh to make the iconic big 3. He won 2 champion chips with the heat along with two finals MVP. He then left the Heat to go back to the Cleveland Cavaliers to try to win them a champion chip for his home town. He then won them a Finals in 2016 while coming back from a 3-1 lead that no other team has ever done in a finals before. Lebron has so far won 3 finals, 4 MVP, rookie of the year and the youngest player ever to have 30,000 points. His career stats so far is 27 points 7 rebounds 7 assists and even 1 steal a game.

With the brief descriptions that I gave you I will now compare them both. Currently Lebron is not done with his career, he is playing with the Lakers and has about a few more years until he will likely retire. But the first thing that automatically stands out is the championships for each player, MJ with 6 and Lebron with only 3. In my opinion it all matters what your talking about, if your talking about legacy MJ has Lebron beat by a lot, if you go 6 for 6 in the finals and one of the most if not the most iconic sports figures of all time, that is going to be hard to beat. But if we were to talk about statistics not bringing championships because that is a team goal only individual stats. Lebron is winning in almost every single category, he could have the chance to be number 1 in points and also be the first player ever to hit 40,000, he is also the most total package player the NBA has ever seen who can do anything on the court at the highest level. But what if you put them against each other 1v1? Well you have Lebron who is 6’8 270 who can run like a guard and jump out of the gym which could be to much for Micheal, Because there are players that Lebron has played against that are very similar to Micheal for example Kobe or possibly a Kawhi Leonard. There is nobody that MJ played that was like Lebron the only one I could think of was Magic Johnson with their similar court vision. But Magic is no where close athletic wise as to Lebron. But you could say MJ could guard him because he won Defensive MVP and was on many all defensive teams. Lebron is not known for his on ball defense as much so that would also give MJ the advantage, knowing that he is one of the best scorers of all time. So this one is really up for grabs and would be a close game.

But in the end once Lebron finishes his career I believe his stats will tell the story and he will be so far ahead of MJ that people cant say he is not the best player of all time. But at this moment legacy wise MJ is still the GOAT but will soon be dethroned.